If you’re a newcomer to crypto, you probably first heard about Bitcoin (BTC) before discovering that another prominent coin is called Bitcoin Cash (BCH). So what is Bitcoin Cash? While it sure sounds a lot like BTC, and even has a similar logo and color scheme, BCH is, in fact, an entirely separate and distinct cryptocurrency.

Coinmama recently wrote about the major differences between these two very different, but related, cryptocurrencies in Understanding Bitcoin (BTC) vs. Bitcoin Cash (BCH). Long story short; BTC is the original cryptocurrency designed by Satoshi Nakomoto and BCH is an offshoot which came into existence in July of 2017.

Different design philosophies and a whole lot of politics, mostly centered around the issue of scaling Bitcoin to enable more widespread and low-cost usage, led to the BCH schism. These issues still keep the camps divided, although—as detailed in the above-mentioned article—both sides have been known to help each other avoid potentially-serious code problems.

What is Bitcoin Cash’s History?

The Bitcoin Scaling Debate was a contentious issue within the BTC community for years. The backstory is that, in the coin’s early days, a block size limit of 1 megabyte was introduced, to prevent spam from clogging up the blockchain and bloating it to an unwieldy size. When the network was relatively young, there wasn’t enough regular transactional activity to reach that limit and so everything ran smoothly; transactions were confirmed promptly with low or even zero fees paid. Some business models were even built around the expectation that that scenario would continue indefinitely.

Once block space became a limited resource however, competition for the inclusion of one’s transaction in the next block naturally began to drive up mining fees. As Bitcoin rapidly gained popularity, transactional activity began to hit the block size limits. This led to network congestion, with many transactions slow to confirm unless (or even if) high fees were paid. Some businesses folded as a result and some Bitcoiners became disillusioned. It was obvious that new scaling methods would be required for the coin to accommodate the growing numbers of users, while maintaining affordable fee levels.

A minority of developers, industry players, and users coalesced around the cause of raising the block size. By simply bumping the block size—to 2, 4, or 8 megs—the immediate problem of slow confirmations and high fees would be solved. However, this approach was resisted by the majority, on various grounds:

Some former Bitcoiners, best exemplified by the erstwhile lead developer, Gavin Andresen, and long-time industry player, Roger Ver, were vocal in their support for bigger blocks. With the backing of Bitmain, then the dominant BTC mining and ASIC production company, the big blockers eventually forked away from Bitcoin, thus establishing Bitcoin Cash.

Craig Wright, (in)famous for proclaiming himself as Satoshi Nakomoto, was involved in BCH before forking off from it to create a separate project, Bitcoin SV (BSV). Despite very little BSV transactional activity, Wright is currently pursuing a strategy of even bigger, giga-blocks; up to 2 gigabytes at last count.

Today, BCH is a major cryptocurrency in its own right, with its own dedicated developers, projects, and supporters. Roger Ver remains a leading figure in the BCH world, as the owner of the Bitcoin.com website, r/btc sub-reddit, and @bitcoin Twitter account. Amaury Séchet, aka Deadalnix, is the lead developer of Bitcoin ABC, the project’s reference client.

Bitcoin Cash currently has 32 meg blocks in comparison to Bitcoin’s effective ~4 meg limit. Naturally, this means that BCH can handle a much heavier transactional load on its blockchain. However, this may be moot as it currently has far fewer transactions than its more popular predecessor.

Vitalik Buterin, inventor of Ethereum, recently proposed off-loading some of the load of the Ethereum network to Bitcoin Cash, an interesting proposal which could take advantage of the latter network’s ample and cheap block space.

To highlight the differences in transaction volume, over the past 24 hours, BTC has confirmed an average of 2349 transactions per block compared to BCH’s 389. For the entire day, BTC processed 311,654 versus BCH’s 52176.

It must also be said that Bitcoin processes an unknown volume of virtually fee-less transactions over its Lightning Network, which processes transactions in a peer-to-peer manner that cannot be accurately recorded.

Based on the above average of confirmed transactions, Bitcoin charges $3.37 per kilobyte of block space (where the average transaction is about 160 to 220 kilobytes) whereas BCH only charges 1 cent per kilobyte. If BCH blocks were to fill up with more transactions, fees would likely rise but it cannot be denied that they are currently extremely low-cost.

At the time of writing, there were 17.9 million circulating BCH but only 17.83 million circulating BTC. This discrepancy is a result of the Emergent Difficulty Algorithm (EDA) employed by BCH during its early days after launch. Intended to protect it against mining attacks or neglect, the EDA was gamed by miners to accumulate BCH at a more rapid rate than intended.

Currently, the Bitcoin Cash price is around $300, sitting at about 3% of BTC. The highest BCH has been relative to BTC is nearly 25% of its price in January of 2018. At that time, there was a lot of talk of BCH “flipping” Bitcoin and assuming the crypto throne, and as a result, many people were motivated to buy the coin. The lowest BCH to BTC ratio was about 2.5%, recorded in December of 2018.

According to the Crypto 51 site, BTC currently has 59,286 Petahash per second of hashpower dedicated to its mining, whereas BCH has 1,784 PH/s. For security purposes, this means it would cost nearly $700,000 per hour to 51% attack BTC versus $21,000 for a similar attack on BCH. This is significant, as both coins are mined by the same hardware. Miners may thus easily switch their hashpower between the two chains, based on profitability or other factors.

Bitcoin Cash uses much of its predecessor’s codebase, with the notable exception of SegWit, which was Bitcoin’s technical solution to scaling (in conjunction with the associated Lightning Network and other forthcoming upgrades).

BCH has much in common with BTC, including its mining algorithm (SHA256), block time (10 minutes), and its transactional record before the fork (meaning that everyone who held Bitcoin before the fork date received an equivalent amount of BCH).

In terms of market cap rankings, Bitcoin Cash with $5.2 billion in value currently contends with Litecoin’s $5.6 billion value for 4th place position. Though at one point, the BCH price briefly spiked so high that it flipped Ethereum for second place:

2,107 people are talking about this

The BCH price reached its all-time high of $4,071 in December of 2017. It has since fallen back to around the $300 level. This makes Bitcoin Cash one of the worst performers during the so-called “crypto winter,” or protracted bear market which ended around April of this year. Yet for those who believe that BCH has the correct scaling strategy or may find synergy with Ethereum, this presents an opportunity to buy Bitcoin Cash at a relatively low price.

Steven Hay is a former trader and gold investor who discovered Bitcoin in late 2012. In 2013, he began writing about Bitcoin and currently writes for Coinmama and 99Bitcoins. Steve also sold art for BTC to better understand the crypto economy. His current focus is on automated Bitcoin arbitrage trading.
All Posts »
PrevPreviousWhat is Ripple (XRP)?
NextHave you paid your Bitcoin taxes yet?Next

To explain it in the simplest terms, Ethereum is a decentralized platform for running smart contracts. So, what does that mean? “Decentralized” refers to a 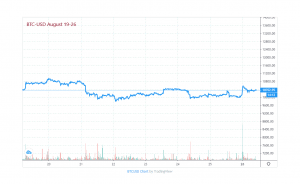