Following a week of extreme volatility, this past week people were markedly less eager to buy Bitcoin. How did this manifest itself? We take a look in our Coinmama weekly roundup.

So are people still buying Bitcoin? Yes! But less than they were two weeks ago. We saw this first in a severe drop in trading volume from 46 billion USD when the BTC price sat at 13,000 USD to less than half of that at 18 billion USD by Sunday evening. And second, in a Bitcoin price that was remarkably steady. While the week before saw BTC price gains and drops of 2,000-3,000 USD over the course of twenty-four hours, by the end of this past week, prices were sitting relatively calmly between 11,000 USD and 12,000 USD. In fact, since July 3rd, the price only went outside that range for a few brief moments. 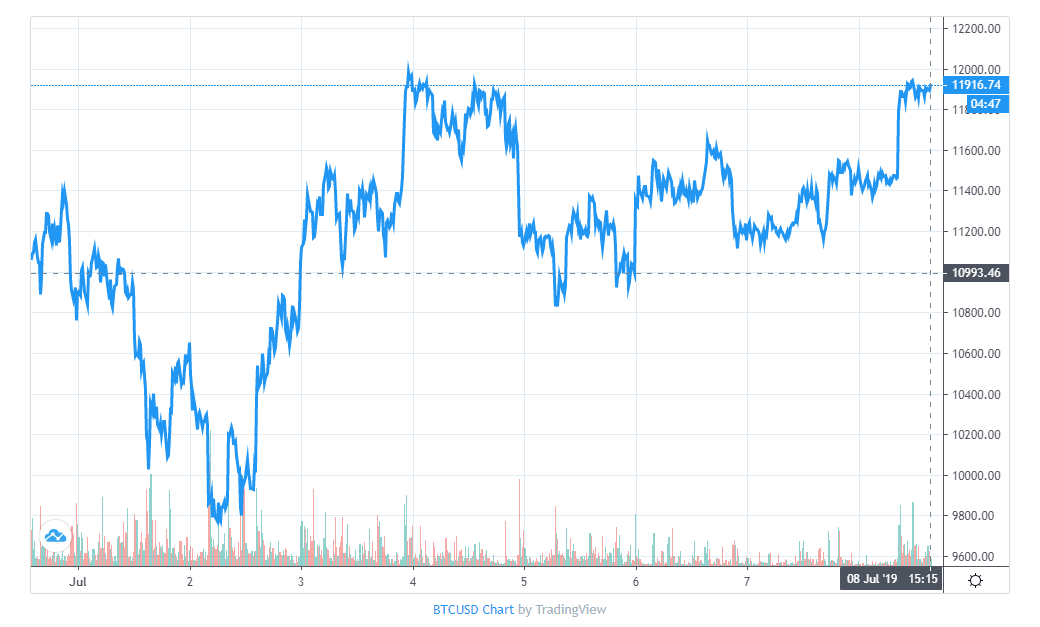 While it may be tempting to take the calm as a signifier of the end of the most recent craze, that’s not necessarily the case. Price analysts regularly disagree on the direction BTC is taking—which brings up the question of how much we can trust price analysis—but most of them agree that a bearish Bitcoin market may be in the coin’s immediate future as it overcorrects from the last rally. Of course, that bearish market return can then easily prompt another round of frenzy as people rush to buy Bitcoin at a lower price. Meaning, at the end of the day, the crypto volatility is still very much with us.

Where do altcoins stand?

June’s spike and the drop weren’t limited to just Bitcoin, as several altcoins followed similar price patterns with people showing interest in buying Ethereum, Litecoin, XRP, and more. But while almost all of the altcoins spiked starting around June 20, it seems that the Bitcoin rally didn’t stay with them long-term. While the BTC price is currently about 20% higher than it was in mid-June, of the altcoins Coinmama carries, only Ethereum is at a higher price than it was on June 20, and it hasn’t quite hit 20%. In other words, the altcoins spiked with BTC and dropped with it, but then failed to recover as Bitcoin did and settle into a groove, instead of continuing further down. For some, that news spells the doom and gloom of altcoins—and certainly Bitcoin maximalists (that is, people who believe you should only buy Bitcoin) are gloating, or at least celebrating—but is that really true? At Coinmama we hope not. While BTC may continue to be the dominant currency (and at 60% of the market share, it doesn’t seem like it’s going anywhere), we think the value of altcoins lies in the projects they represent. The blockchain has possibilities that are much greater than just currency, and many altcoins are aiming to solve pain points and improve blockchain technology. While many of the ICOs that spurred their creation is now dead, the altcoins that remain standing are tied to strong projects and we hope they’ll continue to have a place, if not as currencies then as investment pieces.

This week in Libra

One thing that didn’t calm down this week was the conversation surrounding Facebook’s announced cryptocurrency, Libra. Or maybe “controversy” is a better word than “conversation.” People were already questioning whether Facebook’s historically abysmal record on user privacy put them in the best position to be developing cryptocurrency. But reactions for the most part continue to be negative. In addition to US congress members asking for a stop to Libra, European banks are piling on, demanding increased regulations. (Perhaps more good news for Bitcoin maximalists.)

In all though, it was a quiet week on the crypto front, which was a welcome change after last week’s volatility. With the prices a bit quieter too, we’re all able to take a step back, examine the lay of the land, and decide if now is the time to buy, sell, or hodl.

The Key to Keyless Wallets is Here Bitcoin Mining: How does Bitcoin Mining Work Bitcoin Halving 2020: Everything You Need to Know