When most people enter the crypto market for the first time, they buy Bitcoin (BTC)—after all, it’s the best-known cryptocurrency, with the strongest market dominance. But what if you’re looking to diversify your crypto portfolio? Cryptocurrency is much more than just BTC, and there are more than 4000 altcoins—that is, alternative coins—listed on coin tracking sites. Plus, common investment wisdom dictates that it’s important to diversify your portfolio and not put all of your eggs in one basket.  Our recent article showed some of the benefits of buying altcoins. But if you don’t want to buy Bitcoin, how do you choose which cryptocurrency to buy?

This article examines at some of the most important altcoins; coins that you may want to look into if you wish to build a diversified crypto portfolio. These coins all present a compelling investment case, based on their unique characteristics.

It’s no accident that Ethereum is the second-highest coin by market cap. Since its launch in mid-2015, Ethereum has introduced several significant innovations to the crypto space. From the outset, Ethereum’s focus has been on distributed computing. Ethereum features its own virtual machine and programming language, Solidity, for the creation and execution of so-called “smart contracts.”

Smart contracts are a new type of digital contract, enforced solely by code, which have become a lot more relevant to the invention of blockchain technology. Although smart contracts are also used in BTC, it’s fair to say that they were popularized and made vastly more flexible and accessible by Ethereum. Whereas Bitcoin focuses on remaining a reliable and secure store of value, Ethereum is positioned more as a toolkit for financial innovation and experimentation.

The Ethereum network provides a platform for complex smart contracts to be run over a decentralized blockchain; these are commonly referred to as dapps (or “decentralized applications”). Dapps are essentially smart contracts that can be created or run by anyone at any time, provided they have enough ether (ETH) to pay the dapp’s computational costs. While dapps are almost impossible to censor, they can be exploited by hackers if the contract’s code contains any bugs or vulnerabilities.

As there are many such applications running on Ethereum’s blockchain, including many other cryptocurrencies (which are known as “tokens” when running atop a parent network), this provides a steady source of market demand from dapps users and creators needing to buy Ethereum. Fittingly, Ethereum’s creation was crowd-funded in mid-2014. Investors used Bitcoin to pre-buy Ethereum coins, which were then distributed the following year. Ethereum was thus conceived as an ICO; a funding model which it went on to popularize during its spectacular 2017 rise. Those who managed to buy Ethereum early during its ICO phase received some of the fastest and most explosive gains, even as judged by crypto standards.

As with BTC, the success of Ethereum has inspired countless copycats, although in both cases the original remains the undisputed king of its respective niche. While the ICO mania has passed, smothered by failure, fraud, and regulation, Ethereum remains an interesting investment. Ethereum’s popularity and flexibility make it likely that it may play host to the next “big thing” to stir up a mania – most likely in the DeFi space, which is largely an Ethereum playground – in which case, expect Ethereum to remain extremely relevant.

While Ethereum Classic has fallen down the market cap rankings, signalling that the market does not see it replacing Ethereum as the default smart contract platform, lately a new challenger, Cardano, has shooting up those rankings. Since the start of 2021, Cardano’s price has roughly quadrupled, making it one of the best performing large market cap cryptos. While Cardano has not yet upgraded its technology to allow for smart contract functionality – this is expected in March of 2021 – once that is achieved it may well become a serious rival to Ethereum. Cardano is definitely an interesting crypto and one to watch closely. 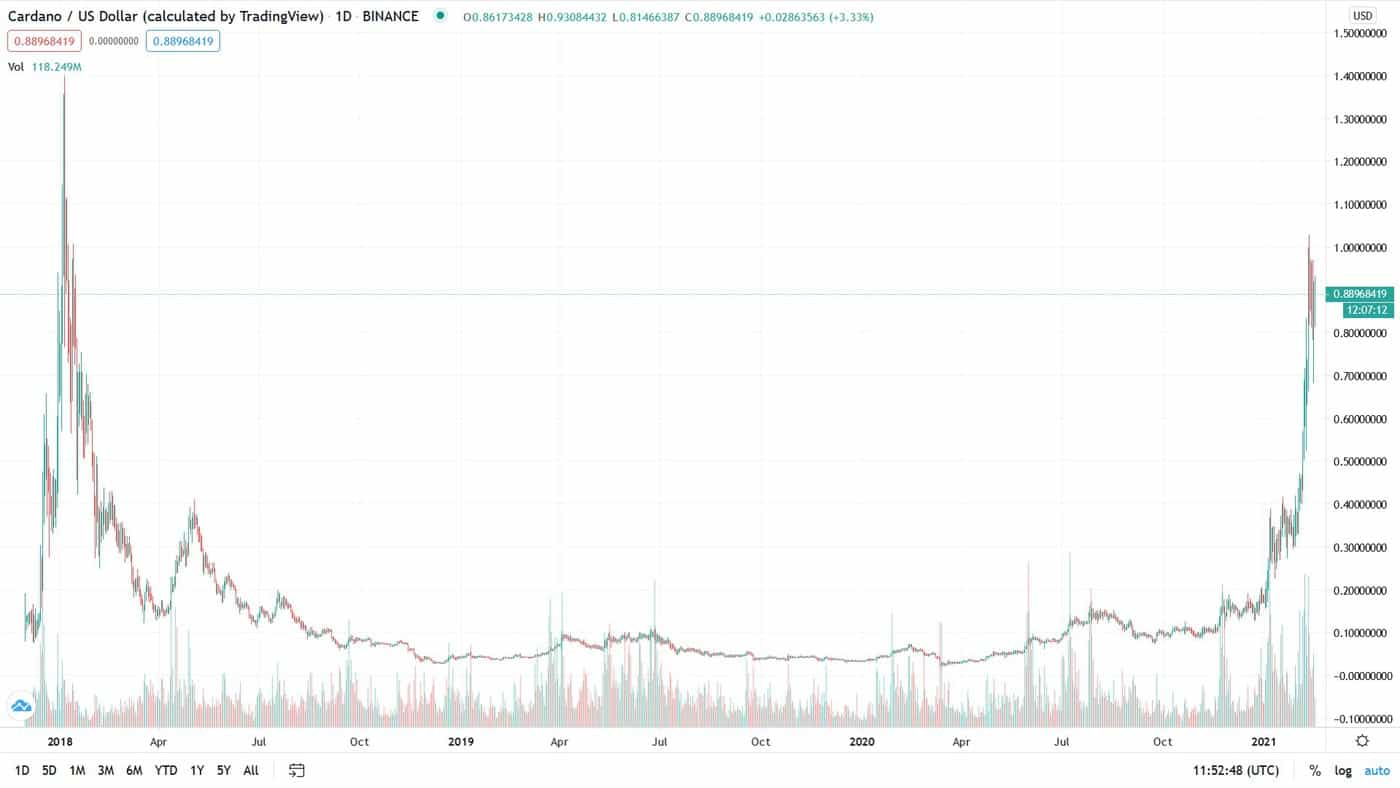 While Cardano has yet to reclaim the high set soon after its launch, its recent performance has nonetheless been outstanding and shows much optimism in its development roadmap. Chart courtesy of TradingView.

Bitcoin Cash is similar to Ethereum Classic, in that it’s a hard fork of Bitcoin. BCH forked away from Bitcoin’s blockchain in mid-2017 due to disagreement over the optimum way to scale the coin. BCH has gone on to follow a markedly different development path, which emphasizes larger block sizes over Bitcoin’s secondary layers.

We covered the history of BCH and how it differs from BTC in a recent article here on the Coinmama blog. To boil down the investment case for BCH; in the event that Bitcoin fails, BCH is able to absorb its entire hashrate as it uses the same mining algorithm. BCH also has lower transaction fees and generally faster transactions across its base layer.

Launched in late 2011, Litecoin is the oldest major altcoin and remains near the top of the crypto market cap rankings. Litecoin is a Bitcoin fork and remains similar to BTC, although Litecoin has block times roughly 4 times faster than its predecessor, a larger supply cap of 84 million LTC, and a different mining algorithm.

Litecoin’s fork to the scrypt algorithm was intended to allow home users to continue mining after the advent of Bitcoin ASIC mining equipment. However, ASICs were eventually developed for Litecoin mining too. Litecoin is currently the 3rd most secure coin, after Bitcoin and Ethereum, based on the expense of a mining attack on its blockchain.

Litecoin’s codebase remains similar to Bitcoin’s, to the extent that Bitcoin improvements are regularly ported across to Litecoin; sometimes even appearing first in Litecoin as in the case of Segregated Witness. Litecoin also incorporates the Lightning Network and atomic swaps have already been successfully demonstrated between Bitcoin and Litecoin.

Litecoin has had many years to establish itself and grow its economy organically.

Monero is well-known as the premier “privacy coin,” or cryptocurrency focused on financial anonymity. Like the cryptocurrencies mentioned above, Monero relies on miners to process its blockchain, however XMR differs in that it’s impossible to tell where transactions originate from or are sent to, or even how much is sent. These properties make Monero excellent for conducting online business with maximum secrecy. Monero is also one of the few altcoins whose code and design has received praise from experts in the Bitcoin development community.

Note that Coinmama does not currently offer Monero. To see more of the altcoins Coinmama offers, visit our cryptocurrency page.

Steven Hay is a former trader and gold investor who discovered Bitcoin in late 2012. In 2013, he began writing about Bitcoin and currently writes for Coinmama and 99Bitcoins. Steve also sold art for BTC to better understand the crypto economy. His current focus is on automated Bitcoin arbitrage trading.
All Posts »
PrevPreviousEarn Free Bitcoin? Coinmama Teaches You How
NextIs Using a Bitcoin Exchange Safe?Next 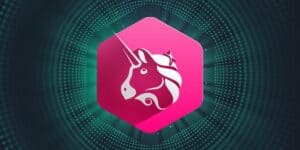 An Intro To Uniswap: Airdrop, DEXes, Governance and More

Along with LINK, UNI is the latest asset available for purchase at Coinmama. But what exactly is Uniswap and its native token UNI? This is 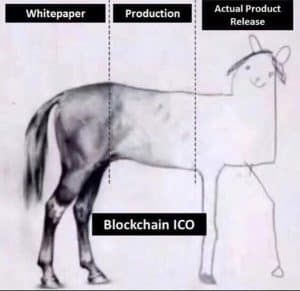