What is Cardano (ticker code: ADA, named for Ada Lovelace)? Cardano is an advanced smart contract platform, developed in association with Charles Hoskinson, who co-founded Ethereum (ETH) and was also deeply involved with Ethereum Classic (ETC). You can buy Cardano right here on Coinmama, as well as the aforementioned ETH and ETC cryptocurrencies. Hoskinson is the CEO of Input Output Hong Kong (IOHK), a development team dedicated to advancing blockchain technology.

What is Cardano’s primary advantage? Most likely, its unique development philosophy, based on a scientific approach to cryptocurrency. Every aspect of the coin’s design, as described in its white papers, and all of its open-source code, underwent extensive peer review by experts and academics from around the world. Outside of real-world battle-testing, this rigorous review process is the best possible guarantee that Cardano is free of errors and vulnerabilities.

Another strong advantage of Cardano is its Ouroboros Proof of Stake model, the first PoS blockchain claimed to be provably secure. Professor Aggelos Kiayias led a team of researchers at Input Output Hong Kong (IOHK) which demonstrated mathematically that its Ouroboros model is secure. Of course, competing crypto developers question Cardano’s claims… Nevertheless, despite using almost no electrical power, Cardano is said to be as secure as Bitcoin, which uses as much electrical energy as a small country to secure its blockchain.

The History of Cardano

The Cardano was project was founded in 2015 and under active development until ADA was officially launched on the 29th of September 2017. It was developed by a large and experienced team and is built by IOHK and has an investment partner known as Emurgo. The Cardano Foundation promotes the crypto and handles legal affairs.

Cardano was funded via an ICO-like pre-sale of ADA tokens, released in 5 tranches. A total of 25.9 billion ADA was sold to raise around $62 million. Most of this funding – around 94.5% – came from Japan. For this reason, Cardano is sometimes referred to as “the Ethereum of Japan.” The current circulating supply of ADA remains around this figure, and with future upgrades the staking process will begin to gradually release the total 45 million ADA tokens.

In 2019, Cardano completed the first stage of its development roadmap, known as “Byron.” This phase introduced the ADA cryptocurrency, Ouroboros Proof of Stake model, and the Daedalus full wallet and Yoroi light wallet. There remain 4 further stages to the coin’s development, each of which introduces new and more advanced elements, as well as greater decentralization. The “Shelly” testnet has been running since the 20th of June and will be implemented after thorough testing.

How Cardano Differs from Bitcoin and Ethereum

Cardano’s Proof of Stake model, Ouroboros, makes it a smart contract platform that operates without any mining, in much the same manner as Qtum (which is also available on Coinmama). Under the PoS model, eventually any wallet containing ADA and set up for staking has a chance to verify transactions and thereby generate more ADA.

The chance of success is proportional to the amount of ADA a wallet contains, which is an approximation of its owner’s “stake” in the healthy functioning of Cardano. Large stakeholders are thus financially incentivized to remain honest, as any fraud would undermine the value of their own holdings.

Cardano was also written entirely in the somewhat obscure Haskell, a programming language known for a high level of error-prevention and verifiability. Satoshi wrote Bitcoin in C++, a more common programming language. It uses the Plutus language (which is based on Haskell) for the coding of its smart contracts, instead of Ethereum’s custom Solidity language (which resembles the less secure JavaScript language).

Haskell and Plutus are both considered to be functional languages, versus imperative languages such as C++ and Solidity. Functional languages are more mathematical in their nature, making the verification of code more predictable. This has the potential to eliminate costly or dangerous bugs, most particularly in complex smart contracts. Cardano thus has the potential to be more secure than Ethereum, eliminating costly hacks and bugs, as exemplified by The DAO and Parity incidents.

Cardano positions itself as a third-generation blockchain. Correctly, the project portrays Bitcoin as the original groundbreaking cryptocurrency which introduced digital scarcity and decentralized money. They see Ethereum as the second generation of cryptocurrency, offering a platform for smart contracts to run over its base-level blockchain. This is rather more of a perspective than a fact, as additional layers (such as Rootstock) bring comparable functionality to Bitcoin, albeit on secondary layers or side channels.

While Ethereum has certainly introduced a lot of flexibility and innovation to the crypto space, it’s not without its drawbacks and rough edges. Cardano certainly offers a range of improvements over Ethereum. However, it remains to be seen whether its technical superiority can overcome Ethereum’s first-mover advantage in the smart contract space.

Much like Ethereum’s smart contracts, computational processing on the Cardano network has a “gas” price, denominated in ADA. This price will vary according to the network’s load and its purpose is to prevent spam and endless code execution. All apps require funding to stay operational, which prevents them from locking up the network despite the scripting language of Cardano being Turing Complete, and thus otherwise able to perform endless iterations.

The coin also separates its transactional and computational layers, into the Cardano Settlement Layer (CSL) and the Cardano Computational Layer (CCL) respectively. CSL handles value transfers whereas CCL is dedicated to smart contracts and decentralized applications (also known as “dApps”). This compartmentalization simplifies operations in both layers and offers greater clarity for regulators.

The official wallet for Cardano is known as Daedalus. Certain third party wallets, such as mobile wallets and the browser wallet, Yoroi, also exist.

The current Cardano price is not shown to best advantage, as Bitcoin is currently outperforming the general crypto market. However, there has been a cyclical pattern whereby “alt season” springs.  Nevertheless, the Cardano price has charted an interesting performance over the last year or so.

The long term price pattern shows the massive spike soon after launch, when there was a frenzy to buy Cardano due to its potential to replace Ethereum, which at the time was suffering network congestion due mainly to bursts of ICO-related transaction activity.

Many altcoins display the same pattern as the Cardano price, which is down since late 2017 / early 2018 and flat since. However, even if we zoom in we see that Cardano price has been performing pretty decently since it established a baseline in late 2018: 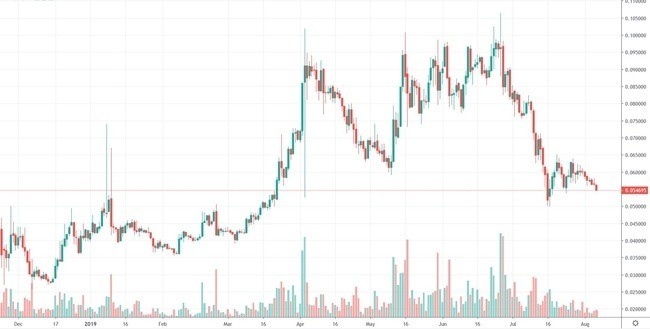 Since the bottom in December of 2018, the Cardano price has roughly doubled to its present level.

The Cardano price is currently around the 5 cents (US) level, given ADA a total market cap of around $1.4 billion. This reflects the high confidence the market has in the coin’s team’s approach and ability.

Cardano has been able to establish a high-value market cap within less than 2 years of operation, despite determined competition from the likes of Ethereum, Ethereum Classic, Qtum, and many others. It is technically impressive and shows great promise but its ultimate success will lie in attracting more support and gaining popular real-world applications. If you’d like to buy Cardano, check out our current ADA offers here on Coinmama.

How to buy Cardano (ADA Coin) with Coinmama

If you’re diversifying your cryptocurrency portfolio, you might be wondering…

Here at Coinmama, we have added three new cryptocurrencies to…