Where to Buy Dogecoin? On Coinmama!

Blog Home › Altcoins › Where to Buy Dogecoin? On Coinmama!

What started as a funny meme eight years ago quickly swept across the internet, captivating the imagination of millions. Dogecoin’s rise since the beginning of 2021 has been epic, with everyone’s favorite meme-coin catapulting itself into the top 5 cryptocurrencies by market cap. Dogecoin has become so ingrained in popular culture that it was featured in a Saturday Night Live segment by Elon Musk.

Coinmama customers from around the world can now buy Dogecoin with one of our many payment methods.

Dogecoin is a cryptocurrency and means of payment similar to Bitcoin, Bitcoin Cash, and Litecoin. It was first released in 2013 by Billy Markus, an engineer at IBM, and Jackson Palmer from Adobe to reach a broader audience than Bitcoin. The founders of Dogecoin decided that to feature a cute Shiba Inu as its mascot and meme to attract widespread attention. It was long before the Shiba Inu meme, captioned with a funny fictional monologue, began to spread across the web. 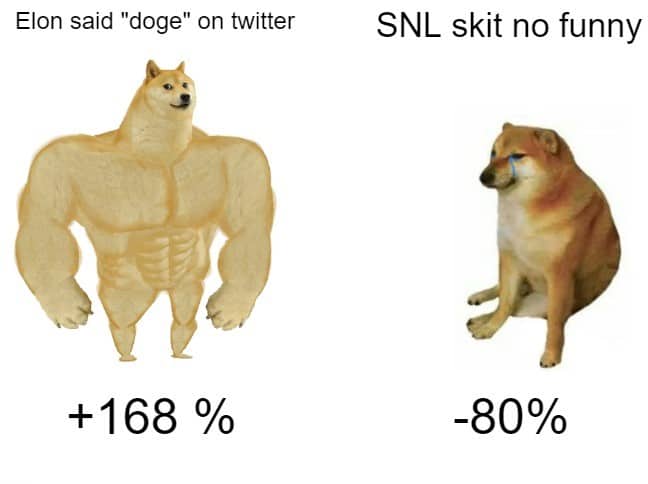 Dogecoin is a cryptocurrency that uses a Proof-of-Work system similar to Bitcoin, with one key difference from a technical perspective. While Bitcoin uses an algorithm known as SHA-256, Dogecoin creators copied Litecoin’s version of a Proof-of-Work algorithm. Dogecoin’s algorithm, known as scrypt, is designed to level the playing field by making it more challenging to mine with specialized ASIC miners and giving an opportunity to people mining with their computer’s GPU.

Success can sometimes mask underlying concerns, and Dogecoin is no different. Despite its soaring popularity and global appeal, Dogecoin faces two main challenges in its quest for greatness.

The first challenge it faces is lack of development.

One of the defining features of Bitcoin and other cryptocurrencies is their open-source code. Any developer can copy their code, wholly or partially, make adjustments, and include it as part of their project. For example, both Bitcoin Cash and Litecoin were born by ‘forking’ Bitcoin, copying Bitcoin’s code, and making slight modifications of their own. Just as Litecoin forked off Bitcoin to create an independent cryptocurrency, so too did the creators of Dogecoin utilize Litecoin as inspiration for their project.

However, open-source also contains risks for crypto projects since it allows everyone to see just how active they have been developing and upgrading their code. Considering Dogecoin’s statistics on Github, a popular online repository of code, we can see that the Dogecoin codebase has not seen much development since early 2018.

How Many Dogecoins Are There

The second major disadvantage facing Dogecoin is its unlimited supply.

Bitcoin’s most significant advantage as a form of money is its fixed, predictable supply. Only 21 million bitcoin will ever be mined into existence, giving Bitcoin its characteristic monetary hardness. Bitcoin currently inflates at 1.76% per year, with 328,500 coins added to the supply each year. When the next Bitcoin halving event happens in 2024, the amount of new bitcoin added to the supply will drop to 164,250 per year.

On the other hand, Dogecoin has none of these properties of scarcity. The current supply of Dogecoin is 130 billion, with 5 billion coins added to the supply each year. And unlike Bitcoin, Dogecoin’s supply is uncapped.

Dogecoin might lack the qualities that give Bitcoin its monetary superiority. However, crypto supporters were quick to point out that Dogecoin is still a harder form of money than the US dollar. Both have an uncapped supply, yet Dogecoin inflates at a slow, predictable rate. At the same time, the Fed continues its erratic inflation of the US dollar.

In January 2021, a generation of activist investors took the global markets by storm when they rallied around heavily shorted companies like Gamestop, causing it to reach sky-high valuations. These young investors coordinated with each other through memes and videos, mainly on the Wall Street Bets Reddit forum, where they hatched the initial plan to pump GME’s stock price. What drove the GME bulls was not a deep understanding of the company’s financials. Rather, memes that positioned GME traders as the antithesis of Wall Street’s elites and the financial system set up to favor them spread like wildfire across the web, drawing in more and more GME buyers.

Regardless of whether one likes or agrees with the trend of meme-driven investing, GME and now Dogecoin indicate that it’s likely here to stay. We’re excited to allow Coinmama customers to participate in this journey.

Buy your DOGE with Coinmama

Dudu Azaraf is the Content & Affiliate Manager at Coinmama and has led marketing efforts across numerous blockchain companies. Having a background in analytics and a passion for simplifying complicated systems, Dudu's focus is to help bridge the gap between complexities of Bitcoin and its expanding mainstream audience.
All Posts »
PrevPreviousMining vs. Buying Bitcoin: Which Is Better For You?
NextSpeaking In Sats: Convert Satoshi to USD and BackNext 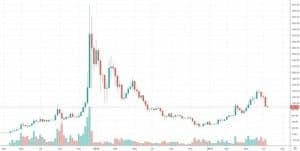 What is Litecoin (LTC)? Simply stated, it’s a cryptocurrency, much like Bitcoin (BTC). For years now, Litecoin has marketed itself as “silver to Bitcoin’s gold,” which looks

Understanding events that split the Ethereum blockchain The introduction of Ethereum in 2013, an innovation by the unassuming maverick coder Vitalik Buterin and his bunch