Blog › Uncategorised › This Year, Make it a Bitcoin Halloween

As if the recent Bitcoin price isn’t scary enough, Halloween is right around the corner. With it’s orange-colored everything, Halloween is a holiday that’s practically made for celebrating Bitcoin. So with this weekend for prep time, we at Coinmama have rounded up the best ways to make this Halloween a Bitcoin Halloween. 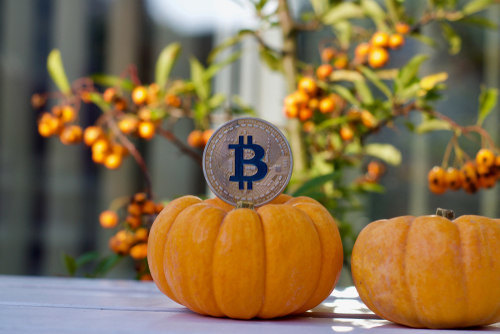 What’s Halloween without a costume? Nothing. Luckily, there are plenty of Bitcoin Halloween costume ideas out there, with a range of creative difficulty from super ambitious to super lazy. Here are some of our favorites:

Pumpkins are orange. Bitcoins are orange. This is what we call a win-win situation. Personally, our jack-o’lanterns have always looked like giant Pinterest fails. But if you’re crafty, carving a Bitcoin B out of a pumpkin shouldn’t be that hard to do. Just make sure to draw it on with a marker first before you start carving. (If you’re crafty, you already knew that of course.) Need some inspiration? Here you go!

Bitcoin cookies are easy to make. Simply make your favorite Christmas sugar cookie recipe, but decorate with orange and white instead of green and red. You don’t even need a special cookie cutter; any drinking glass will do. The best part is that sugar cookies store well, so you can keep eating them long after the candy from trick-or-treating disappears.

Want to show us how you made it a Bitcoin Halloween? We’d love to see! Send your BTC costume and pumpkin photos to us at support@coinmama.com.

This International Women’s Day, Coinmama is celebrating with a pledge to bring more women into cryptocurrency.

6 Gifts You Can Buy With Bitcoin This Holiday

Doing your holiday shopping with Bitcoin is easy. Coinmama rounds up some of the best gifts on the internet that you can buy with BTC.

Bitcoin Whales That Will Make You Jealous

What is a Bitcoin Whale? Coinmama looks at holders of large amounts of crypto, most of whom were smart enough to buy Bitcoin in its early days. We’re jealous too!

Since its inception, naysayers have declared Bitcoin as dead, even as the Bitcoin price continues in a general upward trend. We take a look at BTC obituaries.