Blog Home › Bitcoin news › The Bitcoin Price is Rising. Is Coronavirus Behind it?

Look at the Bitcoin price for the last month, and you’ll see a trend that hasn’t been seen in some time: a steady rise. Bitcoin has increased by 31% in the last 30 days, and the Bitcoin price is the highest it’s been in over three months, inching towards the 10,000 USD mark once more. But while there may be several factors contributing to it, one can’t help but look to the emergence of Coronavirus as a force that’s behind it.  But is a virus that has infected over 28,000 people, mostly in mainland China, responsible for a strong Bitcoin price? 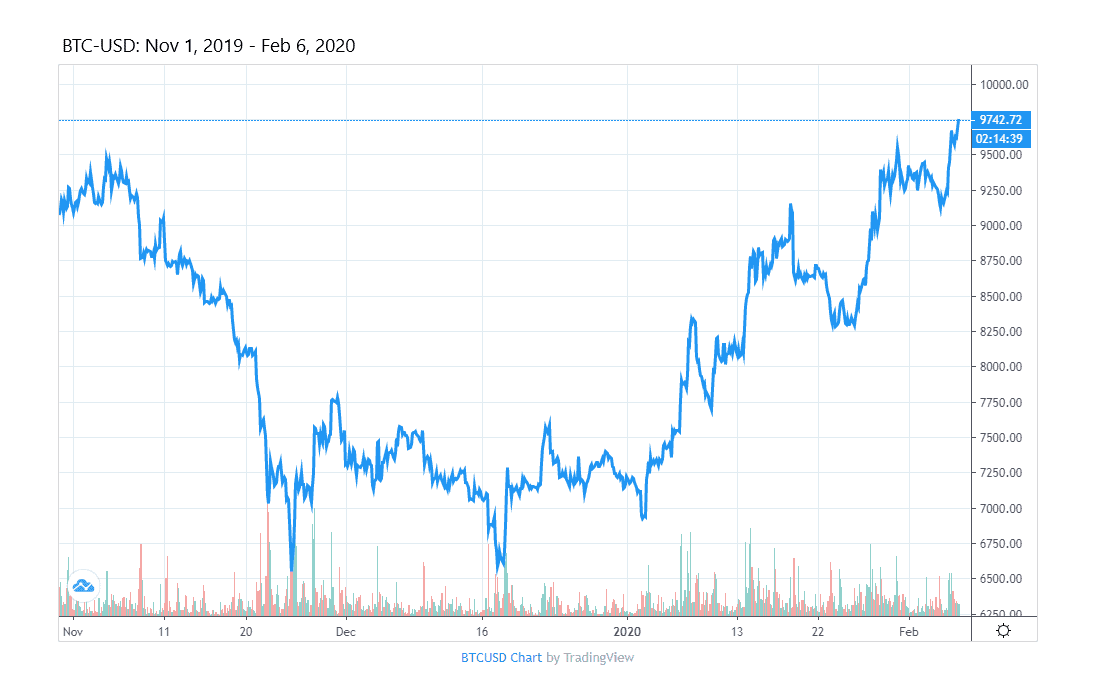 China is an economic powerhouse that’s just been hit hard

Coronavirus is already taking its toll on the Chinese economy. With the 11 million person city of Wuhan essentially on lockdown, and the rest of the Hubei province also under restrictions, trade is suffering. A lockdown of this size would be problematic no matter what, but is especially so in a country that has the second largest economy in the world. As the BBC notes, local businesses such as shops and restaurants are taking a direct hit, as people are less likely to go out in public. But the virus is also affecting global trade: several airlines have already ceased flights to China, and many countries are limiting travel for visitors from China. Additionally, international manufacturers are shutting down or paring back their Chinese operations, both for safety reasons and because consumers are likely to balk at goods that are coming out of China. But what does this have to do with Bitcoin?

Bitcoin performs independently of other markets

Economic uncertainty and instability in the stock market has long led people to Bitcoin. You don’t need to look further than the origins of Bitcoin itself, which came out of growing distrust in the economy following the housing bubble and stock market crash of 2008. More recently, fear of a diminishing local currency, such as from hyper-inflation in Venezuela and unrest in Iran, has caused people to turn to Bitcoin as a safe haven.

There’s another reason the Bitcoin price may be rising as Coronavirus spreads. And that’s that 65% of Bitcoin mining takes place in China. As workforces are quarantined and global trade is halted, that means two things: fewer Bitcoin miners are available to work, and less mining equipment is coming out of China. In other words, Coronavirus is affecting mining activity, which may then be driving up the Bitcoin price.

Despite all of the above, it’s hard to pinpoint the rise in the Bitcoin price to Coronavirus. To do so would be to ignore the fact that the Bitcoin halving, which will cut the mining reward of Bitcoin in half, will occur in just a few short months. Bitcoin price predictions have long pointed at the event as a catalyst for higher prices, and it’s reasonable to assume that at least some of the steady rise is in anticipation of it.

Whatever the reason, one thing is certain: With an increase of over 30% in 30 days, Bitcoin has roared back to life.

Laurence, Co-founder of Coinmama, is a serial-entrepreneur, who has been involved with Bitcoin since 2013. After struggling to buy Bitcoin himself, he set out on a mission to make the process of buying Bitcoin an easy one for all, and so Coinmama was born.
All Posts »
PrevPrevious10 Reasons Why to Buy Bitcoin in 2022
NextNew to Crypto? 5 Things to Know Before You Buy Bitcoin OnlineNext

Tucked away at the far corner of the globe, the beautiful island country of New Zealand has a lot going for it. A GDP per