The week ended on an optimistic note after a month of dips to the Bitcoin price. Though BTC hadn’t touched the 11,000 USD mark since July 21st, and had spent much of the second half of the month below 10,000 USD, it looks like people are ready to buy Bitcoin again, as the coin made its way above 11,000 early today, and is now reaching towards 12,000. Are we at the start of a new Bitcoin price rally? We don’t know, but we certainly like this direction! 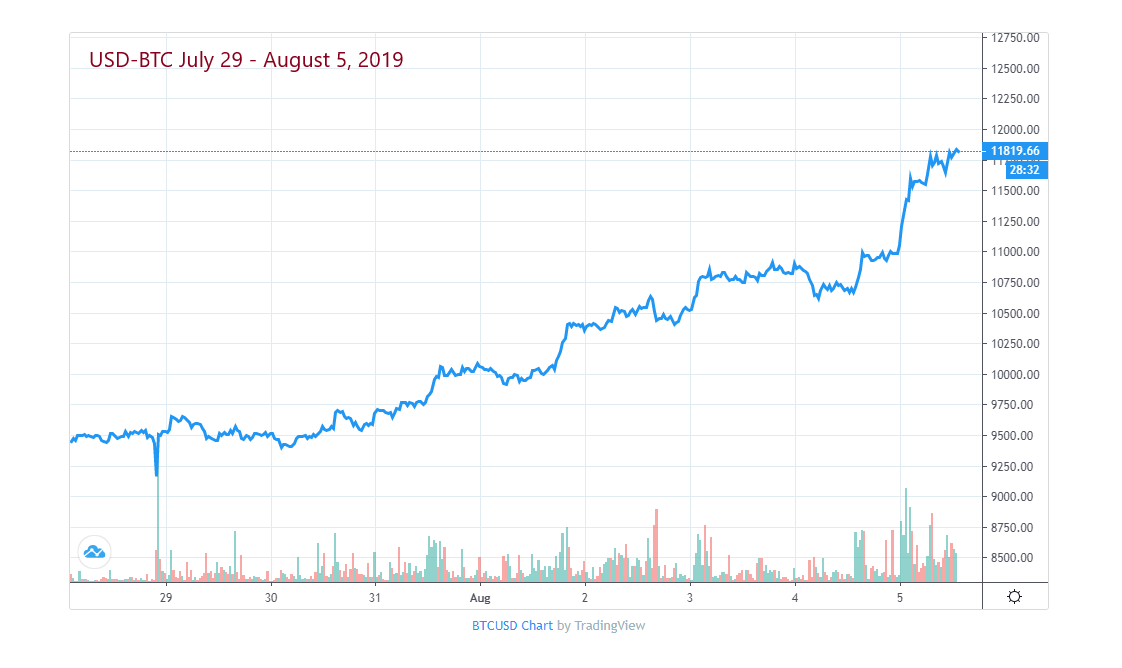 Although the BTC price volatility displayed in recent months may leave investors on edge, it’s also important to note that despite the quick climbs and drops, Bitcoin is still up 200% over its price on the first of the year, while trading volume is up 250% since the start of the year, signaling that people are still interested to buy Bitcoin.

Bitcoin Adoption is Up

Price wasn’t the only piece of optimism last week, with good news for Bitcoin adoption as the Fold app added a BTC rewards program for shoppers. Fold already introduced a lightning network payment platform which gave users the ability to shop at brands such as Target and Starbucks with Bitcoin. Now they’re adding a Bitcoin rewards program as well. We recently discussed the need for using crypto as both an investment and a currency in order to drive widespread adoption, so we’re excited to see Fold join Lolli among platforms that offer Bitcoin rewards. While rewards programs are nothing new—most of us have cash-back rewards activated on our credit card—the idea that we can now earn Bitcoin for buying our Venti Skim Lattes is new, and is an exciting step forward for cryptocurrency adoption. (Excuse us for a minute while we run to the nearest Starbucks.)

This week in Facebook’s Libra

We’ve been following Libra ever since Facebook announced its release, with all of its ups and downs. While the Libra announcement may have been behind the initial Bitcoin price spike that drove it over 10,000 USD for the first time in a year, since then the proposed cryptocurrency has mostly been getting “dislikes.” This week the social media giant finally admitted that the regulatory hurdles that stand in the way of its cryptocurrency may be more trouble than they’re worth, and may not be financially viable for the company, so it will be interesting to see how—or if—the project unfolds, as well as if that affects other companies that are exploring their cryptocurrency options.

Iran is often in the news, but not usually for its cryptocurrency activity. Last week it announced that cryptocurrency mining would be officially considered a legal industry, paving the way for more crypto-related jobs. But it’s not all good news on that end. The Iranian government still doesn’t consider crypto as legal tender, and it’s also not yet legal to buy Bitcoin in the country. Still, the acceptance of mining plus rumors that Iran may be considering its own cryptocurrency, are definitely a step in the right direction.

That’s all for this week’s Coinmama news recap. Join us next week as we cover more of the biggest stories in crypto.