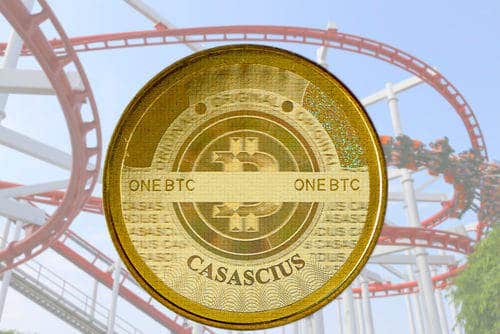 It’s never been easier to buy Bitcoin! Nowadays, just about every possible payment method is available across the entire world. Coinmama alone lets users in over 200 countries and territories buy Bitcoin online, via credit/debit card or with a bank transfer.

The ease with which you can buy cryptocurrency today means that many users aren’t aware of how difficult it was to buy Bitcoin in the early years—a process that often required an in-person meeting or a slow wire transfer to a foreign exchange.

Compared to the early years, modern Bitcoiners have a lot of options in terms of getting Bitcoin. The only downside to the current situation is that as the popularity and ease of Bitcoin rose, so did its price, and it’s no longer possible to buy Bitcoin for under $100, or even $1000! Bitcoin’s former inaccessibility isn’t the only surprising fact for someone new to the Bitcoin market.

1. You Can Buy Physical Bitcoins

One of the most frequently asked questions from novice users is whether bitcoins are real physical coins, like American Silver Eagles or South African Kruger Rands. Of course, the answer is a resounding no. Bitcoins are entirely digital, existing only as data entries in the distributed ledger known as the blockchain.

That said, early on in Bitcoin’s history, a user by the handle of Casascius announced his production of physical bitcoins, which were intended to bridge the worlds of cryptocurrency and collectible coins (numismatics). In September of 2011, Casascius (whose real name is Mark Hamilton) began to offer these interesting collectible “Bitcoins” for sale.

Included within each early Casascius coin, below a tamper-proof holographic sticker, was a Bitcoin private key. Casascius pre-loaded each privkey with either 1 or 0.5 BTC and later on attached even larger amounts, between 10 and 1000 BTC—remember, this was in the early days when you could buy Bitcoin for very little. A buyer could choose to claim the associated BTC by removing the stickers and importing or sweeping the private key into their Bitcoin wallet.

Casascius sold these coins for about 20 to 25% above their Bitcoin price at the time, although in November of 2013 he was forced to stop attaching any BTC due to American laws. Casascius coins, particularly those rare early examples which still contain an intact BTC balance, have since become collector’s items and appreciated greatly in value.

Many other individuals and companies have since gone on to produce physical bitcoins. Notably, Kialara offers luxury physical Bitcoin items, although these also exclude any actual BTC.

2. The First Major Bitcoin Exchange was a Real Hassle to Use… and Originally Sold Collectible Gaming Cards!

Many people have heard of the infamous Mt. Gox Bitcoin exchange, which imploded along with 850,000 BTC in client funds. What’s less-known is that the exchange originally handled trade of a different kind, as described by its acronym (Magic: The Gathering Online eXchange).

In the early days of Mt. Gox, when it handled over 2/3 thirds of all Bitcoin trading volume, the only way to buy Bitcoin from Gox was to deposit fiat funds via a bank wire to Japan. That so many people were willing to endure the slow and expensive process of wiring funds—and to a former Magic card exchange no less!—stands as a testament to the strong demand of the early Bitcoin market and to its “Wild West,” bootstrapped nature.

We’re used to seeing Bitcoin trading volumes reported on sites like CoinMarketCap, which measure trading across exchanges. While there’s a lot of controversy as to the accuracy of such volume figures, there’s another major source of trading volume which goes unaccounted.

Over The Counter (OTC) trading is the term used to describe the peer-to-peer method of buying Bitcoin, which occurs directly between a buyer and seller. No third party, such as an exchange or broker is required. In practice however, exchanges or brokers often put OTC traders in touch with one another and even facilitate and/or secure the exchange.

Why would anyone go through the trouble of finding a reliable OTC trade partner, when it’s easy to buy Bitcoin online? OTC trading is usually reserved for high net worth individuals, who wish to buy Bitcoin in large quantities without moving the price.

Confused? The Bitcoin market works on supply and demand. Let’s say the current price of Bitcoin is $8,400 and you want to buy $100 million worth. You would deposit your $100 million into your exchange account and place an order in the market for $100 million BTC at $8,400. But very quickly, you’d absorb all the volume available at that price and, as the market recognized the emergence of a big volume buyer, sellers would keep raising their prices. You’d be lucky to end up getting an average price below $10,000! In other words, your own actions would drive up the price before you’d be able to buy what you need.

Spreading such large orders across multiple exchanges and patiently buying over time, in discreet smaller quantities, would diminish but not eliminate your upwards effect on price. But someone wanting to buy in bulk would generally save a lot of money and time by trading privately rather than to buy Bitcoin online, which is exactly why OTC is such a huge market.

4. Someone Recently Tried to Buy 25% of all Bitcoins

Speaking of the OTC market, here’s a recent story which illustrates the significance of this market perfectly. The crypto investment firm Dadiani Syndicate was in the news recently when they mentioned that a wealthy client approached them looking to buy a quarter of all BTC!

As there are currently 17 million mined BTC in existence, the intended purchase amounted to roughly 4.25 million BTC, which at the time the news broke, would have been around $34 billion worth of Bitcoin. While the order may have been placed at a lower price than the market price of $8,000 at that time, it’s fair to say that tens of billions of Dollars were offered.

Of course, the order could not be fulfilled, as no single entity has 4.25 million BTC to sell. It’s estimated that Satoshi Nakamoto mined around 1 million BTC, although it’s unknown whether Satoshi retains access to this hoard, and besides, he’s impossible to contact since his identity isn’t known.

While it may be possible for a multibillionaire to amass such a quantity, it would be necessary to do so piecemeal through a lengthy series of trades with major holders. Rumors of the buy-up would doubtless spread rapidly in the community, driving the price up beyond the reach of all but the world’s wealthiest individuals, funds, corporations, or governments… Perhaps someone out there really is looking to corner the Bitcoin market, in much the same way the Hunt brothers acquired one-third of the civilian silver market in 1980.

5. You Can Also Buy Fiat with Bitcoin

Buying fiat with Bitcoin is more commonly known as “selling.” As fiat money is still the default, many people still think of Bitcoin as something to trade to get more fiat money. However, if Bitcoin becomes the currency standard in the future, then it’s likely that people will start referring to buying or selling fiat instead. It’s really just a matter of perspective.

Fiat is surprisingly cheap when priced in Bitcoin. According to a new website which monitors fiat priced in Bitcoin, FiatMarketCap.com, you can buy a single unit of many world currencies for less than 10 satoshis! As of mid-June 2019, one US Dollar sells for just 10,771 satoshis, one Chinese Yuan is only 1,555 satoshis, and one Euro is about 12,081 satoshis.

Steven Hay is a former trader and gold investor who discovered Bitcoin in late 2012. In 2013, he began writing about Bitcoin and currently writes for Coinmama and 99Bitcoins. Steve also sold art for BTC to better understand the crypto economy. His current focus is on automated Bitcoin arbitrage trading.
All Posts »
PrevPreviousBuy Bitcoin Anonymously? It’s Complicated!
NextBlockchain Books You Must Read Before You Buy BitcoinNext 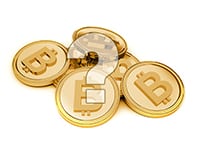 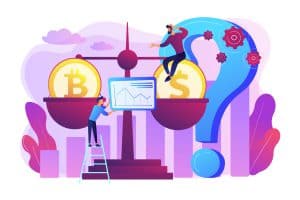 When the BTC price changes dramatically, analysts are quick to give their opinion. But which Bitcoin price predictions can you trust?