Laszlo Hanyecz and Jeremy Sturdivant are unfamiliar names to most people, even to many in the crypto community. Yet Laszlo and Jeremy have the distinction of being the first men on record to respectively buy and sell a tangible, real-world asset using bitcoin. Back in 2010, the two traded bitcoins for a couple of pizzas and, in so doing, made history. That’s one small transaction for a couple of guys, one giant economic breakthrough for mankind!

Laszlo and Jeremy’s transaction kicked off what has become an important annual celebration in the crypto world – Bitcoin Pizza Day! Perhaps the most surprising and shocking aspect of Bitcoin Pizza Day is the amount paid for these 2 pizzas – a whopping 10,000 bitcoins! That’s worth a staggering $200,000,000 ($200 million US Dollars) at Bitcoin’s all-time high, the price reached in December 2017.

You can check the current value of those 10,000 BTC by visiting the Bitcoin Pizza Index, which tracks the value in Dollars, Euros, gold, and silver. 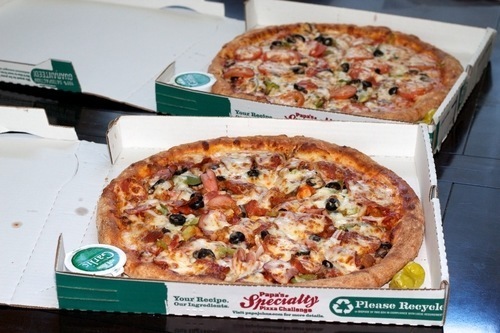 (The two pizzas in question. Image taken from an archived site.)

This article will help you understand the Bitcoin Pizza Day tradition; how it came about, what is signifies, and why everyone in the crypto world goes pizza-crazy every year. We’ll also take a quick look at some of the ways in which people around the world celebrate this unique economic anniversary.

The base of Bitcoin Pizza Day

The conversation which started it all was initiated by our intrepid foodstuff payments trailblazer, Laszlo Hanyecz, on the Bitcoin Talk forum:

Laszlo wanted a couple of pizzas with standard toppings (no weird fishy stuff, like anchovies) and he wanted to test out Bitcoin’s utility for everyday purchases. At the time, Laszlo was living in Florida in the United States. Laszlo was (and still is) an active Bitcoiner, having contributed code to what was then Satoshi’s fledgling project, prior to making this famous offer.

Laszlo with his children, Liam and Amy.

Laszlo posted this offer on the 18th of May, 2010. It took a roughly 4 days before someone successfully matched his order, despite the fact that Laszlo was offering 10,000 bitcoins for two pizza pies. At the time, one bitcoin was worth a little over 0.004 cents (US). 10,000 BTC was therefore worth roughly $41. As two Papa John’s pizzas cost around $35, even at the time it was a generous offer. Of course, Bitcoin has appreciated tremendously since 2010. If someone made such an offer today, chances are that it’d be snapped up within 4 seconds rather than 4 days!

It must be kept in mind that back in mid-2010, Bitcoin was only around one and a half years old. It had no firmly established monetary value, and little practical usage. Bitcoin was considered an interesting experiment and technical novelty, but not yet seen as “real money.” However, some forward-thinking individuals saw its potential and of them decided to take up Lazlo’s offer.

A forum user known as “jercos,” real name Jeremy Sturdivant, decided to claim the bounty. Jercos negotiated with Laszlo via the #bitcoin or #bitcoin-dev IRC chat channel, and with the Papa John’s pizza company via telephone.

By the 22nd of May, jercos had succeeded in purchasing the pizzas for Laszlo and was duly awarded the 10,000 BTC. Jeremy was living in California at the time, so he had to go to some considerable trouble to place the order with a Papa John’s branch in Florida as well as pay them via an out-of-state card.

Why does Bitcoin Pizza Day matter?

Beyond being a cool origin story for how Bitcoin first gained acceptance as a payment method for real world goods and services, Bitcoin Pizza Day remains important for economic and social reasons.

On the economic side, it demonstrates Bitcoin’s rapid and tremendous success, as measured in other currencies. This day serves as an excellent reminder that Bitcoin may be worth a great deal more in future, which encourages users to invest their time, effort, and money into the Bitcoin project. In May 2010, 10,000 BTC seemed like a trifling amount, so perhaps what seems an insignificant amount of bitcoin today might be worth a fortune in future…

As for the social side, Bitcoin Pizza Day serves as a link to the early days of Bitcoin. Laszlo and Jeremy are remembered for being early adopters willing to experiment with a technology they both found interesting. The modern celebration of Bitcoin Pizza Day is also a great excuse for Bitcoiners to get together to break bread (or pizza, in this case). The crypto space is often complex, abstract, and serious, so a way to make it fun and simple offers a welcome change of pace!

Crypto enthusiasts, companies, and individuals celebrate the 22nd of May every year. The #BitcoinPizza hash tag is often used when discussing the event across social media. There’s always an air of joy about these proceedings, as well as an appreciation for Bitcoin itself. Every year, there are more and more people joining this celebration in their own unique way. As there are no hard and fast rules on how to celebrate Bitcoin Pizza Day, you’re free to come up with your own interpretation!

Bitcoin Pizza Day is always celebrated across the crypto media and often by the mainstream press too. Here’s a 2018 article on the subject from Forbes. As we’ve come to expect from mainstream media crypto coverage, the article contains some factual errors (like saying Jeremy lived in the UK, or that BTC was worth 0.0008 cents at the time) but at least they’re trying! 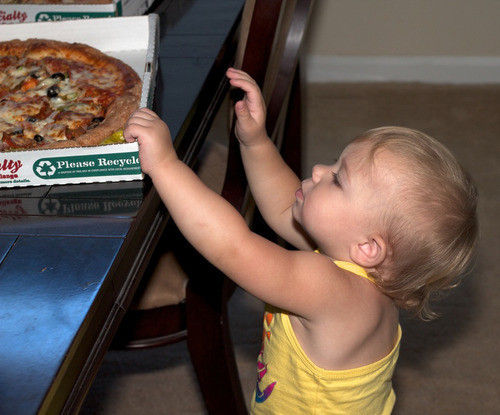 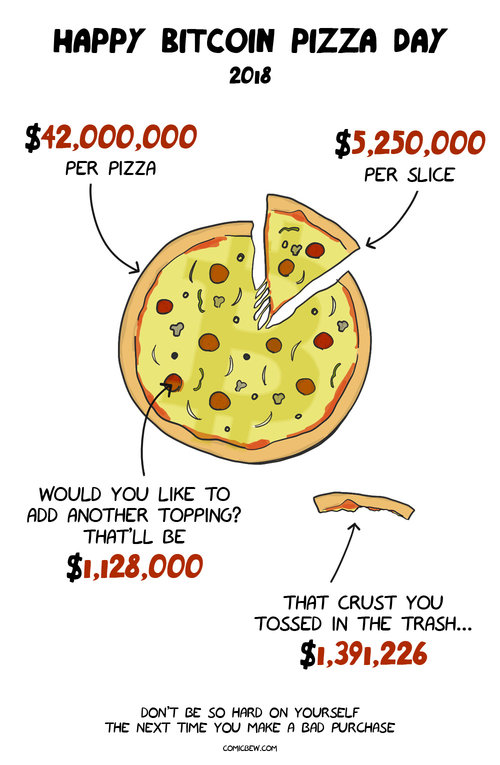 If you follow Bitcoin social media or sites like Meetup, you’ll likely discover real-world Pizza Day parties in your area. And if you don’t find one, why not start one?

The Future of Bitcoin Pizza Day

On the 25th of February 2018, Laszlo Hanyecz made history once again by being the first person in the world to purchase pizza using the Bitcoin Lightning Network! Laszlo paid 0.00649 BTC via Lightning for another two pizzas.

When Laszlo conducted this trade, a middleman was still necessary to purchase the pizza using fiat. Additionally, a complex workaround was required to prove to the pizza delivery guy that Laszlo was the purchaser. Hopefully in future, every pizza shop will accept Bitcoin and be able to process Lightning Network transactions!

This International Women’s Day, Coinmama is celebrating with a pledge to bring more women into cryptocurrency.

New to Cryptocurrency? 5 Things to Know Before You Buy Bitcoin Online

Bitcoin may have gone mainstream in 2017, but not everyone…

VIDEO: What are Stablecoins?

Join us for the next installment of our intro to cryptocurrency video series as we take a look at the role of Stablecoins within crypto.

6 Gifts You Can Buy With Bitcoin This Holiday

Doing your holiday shopping with Bitcoin is easy. Coinmama rounds up some of the best gifts on the internet that you can buy with BTC.

A Bitcoin wallet is the first step to buying Bitcoin. Learn how to choose the right wallet, and how to safely store your cryptocurrency investment.