As we plan out what we want to achieve in 2019, the subject of our finances naturally arises. How should we allocate our investments this year? Will traditional markets decline, as many are predicting? And will the Bitcoin (btc) price recover this year?

Without a crystal ball, there’s no way to give a definite answer. The best we can do is to learn from history. Doing so will help us to make some educated guesses on how current and expected events will play out.  With a little luck, such educated guesses should leave our investment portfolio in better shape come the end of 2019.

It’s no secret that Bitcoin goes through cycles of bubbles and crashes. Over its 10 year history, there have been at least 3 such major cycles, in which price has reached a terrific new high before retracing by over 80%. Shorter and less dramatic sub-cycles occur between these points. The following long-term, logarithmic chart from BitInfoCharts.com illustrates the point:

The first major peak in June of 2011 saw Bitcoin’s price in Dollars reach $25 before crashing back to $2 in November of that year. This was a loss of over 90% which occurred over 5 months. Price regained the $22 level in February of 2013, a span of around 20 months from peak to recovery.

The most recent major peak occurred in December of 2017, when Bitcoin reached nearly $20,000. Price has subsequently collapsed to a low of around $3,200, representing a loss over 80% – although it remains to be seen whether $3,200 will be the ultimate low in this cycle. Some believe the bottom has been found, the more bearish expect it will plunge below $2,000 or even $1,000.

What’s clear from price history is the general upwards trend over time. Although this is less noticeable on a logarithmic chart, a standard long term price chart reveals one obvious point. Despite the recent (and some might say, “catastrophic”) crash, Bitcoin is worth a lot more today than 10 or even 2 years ago:

From these charts, it’s clear that the markets follow their own bullish or bearish cycles, often paying scant regard to events or trends. With that said, here are a few of the higher-profile developments which will play out in the Bitcoin space over 2019:

Something which a lot of Bitcoiners are anticipating to is the launch of the Bakkt Bitcoin futures exchange in America. More than just another crypto exchange, Bakkt is significant for being operated by ICE, the same company which runs the New York Stock Exchange and numerous other major global exchanges.

Bakkt, which is scheduled to launch in late January pending regulatory approval, will allow institutional investors to trade Bitcoin futures. Unlike existing Bitcoin futures markets however, Bakkt’s offerings will be physically settled. This means that investors will trade contracts which are backed (hence the name) 1:1 by real bitcoins, which may be also withdrawn from the exchange into Bitcoin wallets. If trading on Bakkt proves popular, the fact that its contracts require real bitcoins should lead to increased demand.

Bitcoin’s so-called “second layer,” the Lightning Network (LN), continues its rapid expansion in 2019. If you haven’t heard of LN, here’s the elevator pitch; Lightning allows for instant and virtually fee-less transactions between users. As Lightning transactions occur separately from Bitcoin’s blockchain (with the exception of the first and last transaction), Lightning allows Bitcoin to scale massively without increasing blocksize (and thereby harming decentralization by diminishing network participation).

A graph of the current state of the Lightning network reveals the rapid expansion in value and activity since LN beta software was released last year. Currently, Lightning has 560 BTC (worth about $2 million at the current BTCUSD price of $3587) in user-invested liquidity.

Price may be down but that’s not necessarily hurting adoption for those attracted to Bitcoin’s utility – as opposed to price speculators. Adoption in South America seems particularly enthusiastic at this time. Demand is not only high in Venezuela, where one might reasonably expect any alternative to hyperinflationary fiat currency to be popular. Argentina, Colombia, Chile and Peru are also seeing high demand.

While Argentina has certainly seen its share of monetary problems, perhaps the growing popularity of Bitcoin in these other countries is due to the spread of millions of Venezuelan economic refugees. Their tales of economic hardship due to hyperinflation serve as a compelling example of Bitcoin’s deflationary advantage.

The demand for Bitcoin in these countries is most apparent from peer-to-peer trading volume; a metric which is both difficult and expensive to fake (unlike the dubious volume figures reported by certain centralized exchanges). 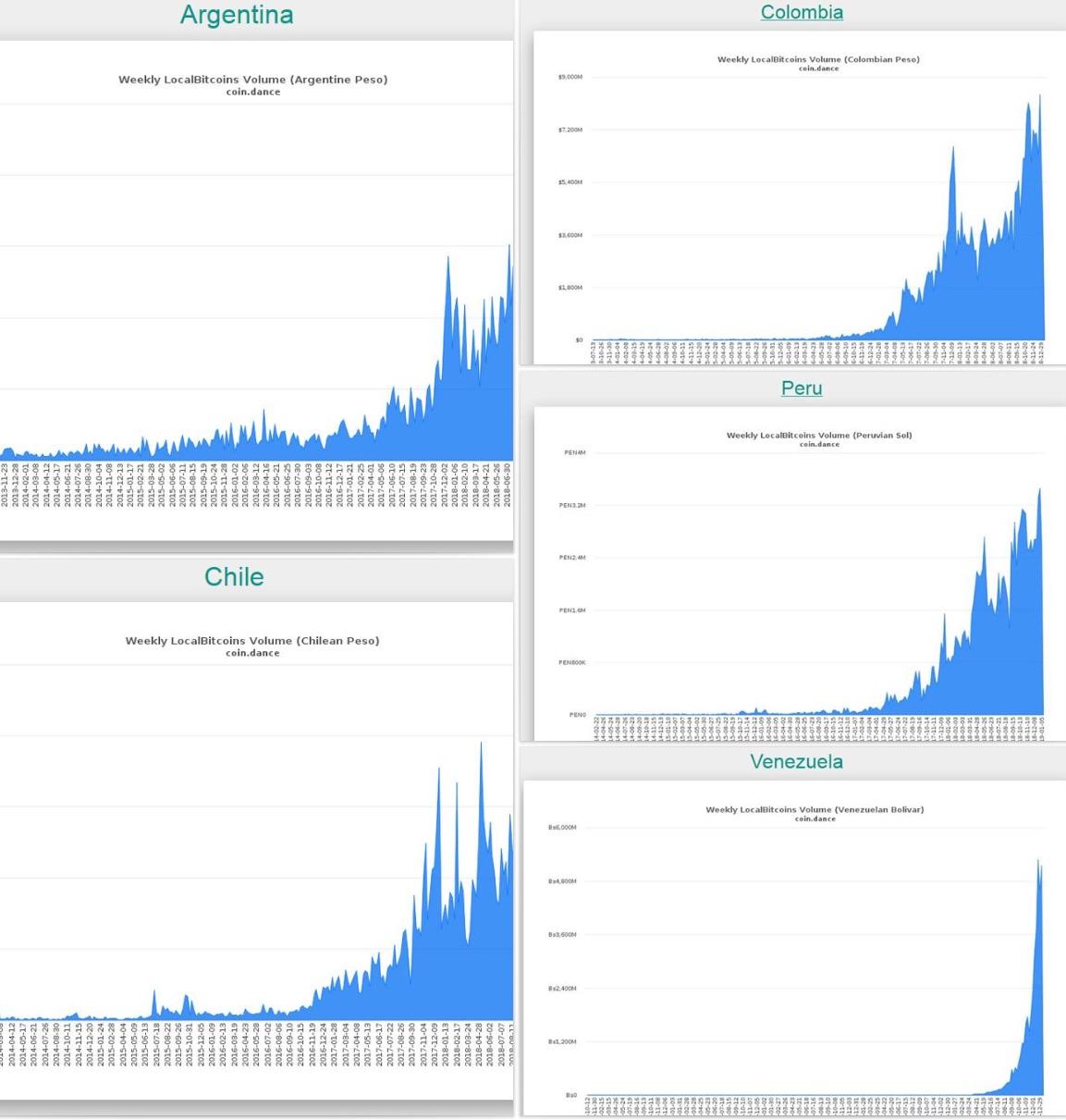 Charts courtesy of Coin Dance and presented in terms of fiat expenditure on Bitcoin.

Something else to consider is that it isn’t only monetary failure which might drive ordinary people to alternatives options such as Bitcoin. In France, the Gilet Jaunes protest movement famously called for French citizens to withdraw their money from banks on the 12th of January. This move was designed to exert political protest on the French establishment by threatening its financial backers. Indeed, such coordinated withdrawals are designed to trigger a destructive bank run, as banks retain only a small fraction of deposited funds. If these types of protest actions catch on, they could greatly endanger the fiat monetary system, or at least erode confidence in its stability. Bitcoin would likely be a beneficiary of any such occurrence.

Other indicators of healthy appetite for bitcoins include the success of various Bitcoin ATM companies, who have installed over 4,204 Bitcoin ATMS (or “BTMs”) around the world to date. For example, Auscoin, a BTM company in Australia, reported a turnover of 1/3 of a million Dollars per week in 2018.

New payment options targeting mainstream users are also being launched around the world this year. In January, the French tobacconist chain, Tabac, started selling redeemable Bitcoin vouchers to people in Paris. It’s expected that as many 6,500 Tabac stores will be selling Bitcoin across France by February of this year.

In the United States, Coinstar kiosks (which are ATM-like machines, most often located inside grocery and big-box stores, which convert change and allow charitable donations or gift card purchases) began selling redeemable Bitcoin vouchers in January of 2019. Coinstar’s Bitcoin trial is currently running across 821 kiosks in eleven US states. However, the company has more than 20,000 machines in total. Should their initial testing prove successful, a lot of people will be presented with the option to purchase Bitcoin whenever they go shopping.

As you probably know, the rewards which Bitcoin miners receive are halved every four years. The next halving is expected around May of 2020. At that time, the supply of new bitcoins will be halved. According to the economic law of supply and demand, price should rise as bitcoins become scarcer.

How Will These 5 Trends / Events Impact Bitcoin’s Price?

Many credit the excitement surrounding the launch of the first US Bitcoin futures, traded on the CME and CBOE, with the tremendous price rise to $20,000. However, Bitcoin’s price began falling almost to the day that these futures opened for trading. Might we see the opposite occur when Bakkt launches?

One thing’s for sure: Bakkt’s influential investors and corporate partners (which include Microsoft and Starbucks) will gain or deepen a vested interest in promoting Bitcoin. It’s possible this might lead to an outcome such as Starbucks accepting Bitcoin, which would certainly boost mainstream awareness and adoption.

Furthermore, Bakkt’s approval makes it more likely that the SEC will (finally) approve a Bitcoin ETF. An ETF would allow retail investors to invest in Bitcoin (or at least a derivative thereof) via their traditional stock market brokers, even using their pension funds. Again, this would be likely to increase awareness and adoption of Bitcoin.

Many Bitcoiners expect that Lightning will prove revolutionary for various payment types. Certainly, Lightning enables cryptocurrency transactions for various novel situations, such as instant and secure on and off-line retail purchases, in-game microtransactions, per-second billing of WiFi access or content streaming, and so on.

If even one such new use case catches on, it could attract a fresh influx of Bitcoin adopters. After all, the novel use case of darknet market purchases via Bitcoin led to considerable media attention, which in turn attracted many early adopters.

Mainstream adoption is difficult to measure. However, in theory, the more people who want Bitcoin for whatever reason, the higher its price will rise. Political and economic troubles can certainly drive Bitcoin higher in 2019. We’ve seen in the past how such economic troubles, for example the Cyprus bail-ins, create a lot of positive publicity for Bitcoin which then quickly translates into higher prices.

The increasing availability of purchase options makes it easier for newcomers to get into Bitcoin, especially when these options are fairly straightforward. It’s worth keeping in mind that Bitcoin’s price didn’t really start moving significantly until the launch of the first international Bitcoin exchange, Mt. Gox. Unless it’s easy or at least possible for anyone who wants Bitcoin to purchase some, price is unable to reach its full potential.

Although mid-2020 may seem a long way distant, halvings are high visibility events with a relatively predictable effect on price. As a result, speculators often buy bitcoin well in advance of a halving, banking on a price rise. The historical trend is that price appreciated in the years preceding each halving; notably 2015 and 2011.

The bear market has tested the strength of all cryptocurrencies and the companies and individuals involved in them. Bitcoin as a system has weathered the storm, although some miners, companies, and investors have been undone by it. Continuing technical development, user adoption, and investment by serious players suggests that it’s only a matter of time until Bitcoin rises again.